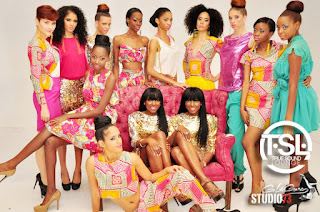 [Bronx, NY] In a residential apartment building section of the Bronx, on a far-away, isolated, warehouse-lined street, located at 865 East 135th Street and Walnut Avenue, in a very quiet space just above the third floor, where the sound of the music was buzzing, signaling that something cool was taking place, there was a very special event going down at the True Sound Lounge last Saturday evening.

As the fashion show was about to start, many more people continued to come and they had to rush to take their seats.  The hosts,George and Getti, said a few words before the show began; soon, as many as twelve models started to strut their stuff, rocking the DpiperTwins clothing line as they hit the runway looking so fabulous and stunning as ever. Danielle and Chantelle, the Dpiper twins were present and they did their "thang."  When the fashion show ended, the many photographers at the event started to take pictures of the 12 models who had walked the runway; the models, including the Dpiper twins, struck provocative poses and smiled for the camera.

I thought the runway was pretty awesome with all the sparkling lights that change colors perpetually. Anyway I liked the show and the setting very much.  Soon many ladies and gents started to dance and enjoy themselves. There were also singing performances and a DJ Madic cranking up the music.  All in all this event was something very special that everybody could enjoy.
Stay Connected With Ryan Ngala On

Subscribe to the site on Google Reader
Keyword: RyanNgala.Posterous.com
Posted by Ryan Ngala at 6:48 AM No comments: